You sat alone, wondering what had happened. Your friends had left you, implications that the one you were was no more. That somewhere along the way, you’d lost yourself. The road ahead looked barren, but on the horizon lights suggesting something more… Something else…
Down the road, a man in a tattered old suit that had seen too many winters, with a shirt that was once white hidden under a black noose came your way. He gently tapped you on the shoulder, asking you if you were going his way. You nodded cautiously, knowing that there was something not quite right with the man in the tattered suit. That he had an unexpected element about him. He said “life is a fun ride. I can go with you but only if you bring my friend?”
Behind him sat a man in an undone straitjacket, with white trousers too short for his long legs and toe nails that were attempting to root him to the earth. Hunched in a foetal position, his long fringe partially hid tired eyes framed in black but revealed the maniacal smile he was attempting to obscure with his sleeve. He gripping his shins for dear life
The man in the suit told you “he’s no bother, he doesn’t speak often… Only when you’re weak.”
“When you’re weak?!” You asked.
“Yes, he’s a man of few words, he only speaks when is necessary, but it’s important that he travels with us. He can be a bother, but I can deal with him.”
Concern swept your brow. The man in the straightjacket shot you a smile with empty eyes that gave you chills. He looked familiar, like a lost friend from the days of black nails and girls that couldn’t be held. But something about him was different, something made you want him kept at a distance.
You trusted the man in the suit. He reassured you. He knew how to control the man in the straightjacket.


Walking down the road with a new companion and his necessary friend, you knew that new sights awaited you, things that you had never experienced before. You tried to look back, but you were compelled to move forwards by something more sinister than your travelling companions. What you could see behind you was distorted anyway, but you couldn’t shake the feeling that what had been held a place in your heart that could not be forgotten. The man in the suit assured you that what was to come was far more important than what had been.
As the lights grew brighter and nearer, and the sun grew farther, new travellers appeared on the horizon, hoping to join your journey, whether you wanted them or not.
Through abandoned nightmares, age killed the fear and anger that once was, only to replace it with new fear. You’d never be the same again.
Posted by Jon Cole-Dalton at 21:03 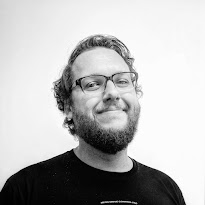